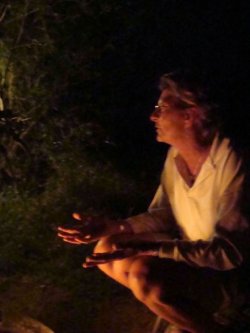 dear friend Baba and I were traveling the desert… 3 weeks, no phones, no major destination… just desert. We motored thru the west Texas landscape watching dust devils and calling in storms and up onto the plateau of New Mexico, and into the four corners among mesas, buttes, canyon and sage. The sound of tires on asphalt, the deep thrumming of the engine, the wind humming in our ears all competing with the music of Miss Pickle on a road trip.

One night we set up camp on the north side of Lake Powell. The day had been adventure- enough for most people to live thru. We crossed the Escalante, down into a canyon and up again on washboard  roads and down a harrowing, hair-pin turn, boulder-strewn, a drop of 1000 feet to open desert below. We ran across the flat land, discovering we no longer had brakes after precariously easing down the side of the cliff and bulldozed our way thru sandpits to the edge of the Lake Powell. A second symptom progressively worsened just before the last leap of faith down the cliff. Once the engine was turned off, there was no starting it again, the solenoid on the starter was fried.  There were no inclines to drift down allowing me to jam her into gear and force the engine, no crawling underneath to tap the started into submission. It would take assistance of a driver passing by to jump-start. And out here on a lonely cove of Lake Powell there was no one in sight.

We had no fear left that day and set camp along water in the desert with a grand dinner and a bottle of wine. Just before sunset I looked out at the lake and the angled shafts of sunlight and mentioned my disappointment in the lack of bats at our recent abode on the edge of  the Grand Canyon. My game has always been to sit at dusk and play with the bats. Tossing pebbles up in the air and tempting the bats to swoop down in front of me. Oh well. I poured a glass of wine and started to get a fire going for dinner while Baba floated along the shore. Suddenly, Baba exclaims “Look at these interesting little birds”.  Hundreds, flitting up and down, swooping before our faces, flashing past our heads as dusk descended. Not birds…bats! Bats by the thousands taking advantage of water in the desert which begets algae… which beget insects, (mosquitoes)…which begets…bats… which begets Life.

Baba and I laughed and marveled.

We sat down to dinner, the final rays of light dissipating. The contrast of buttes and water. The lake beginning to shimmer in starlight. The crescent moon, early setting, would find it’s rest behind the butte. It’s shape so delicate and curved to one side that as it set, it looked ready to recline into the landscape for a sweet night nap.

I looked at the moon and quietly spoke, ” the only thing better would be a shooting star”. As I finished my spoken thought, a blazing star with a trailing tail dropped over the moon and into obscurity behind the butte.

Baba looked at me, both of us now standing, breathless at what had just befallen. “Joannie, if you ever… from this day forward doubt your power… DON’t!”

I am a story teller and I found my power, again. Baba is often my interpreter in moments like these. Having a witness, a cohort, a believer  is the best part of the travels.